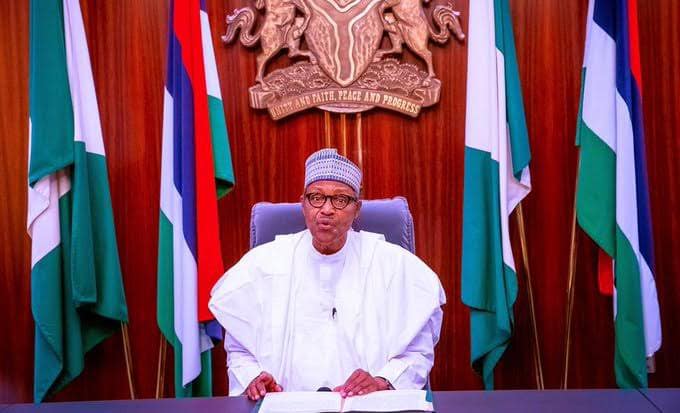 President Muhammadu Buhari on Thursday addressed Nigerians in a nationwide broadcast. This is coming after about two weeks since the inception of the #EndSARS protests that have grounded activities across the nation. In the last few days, the protest took a different turn as it was said to have been hijacked by hoodlums, resulting in the loss of scores of lives and mammoth destruction of properties.

Things became sourer on Tuesday as personnel of the Nigerian Army ambushed and shot at peaceful protesters at Lekki tollgate in Lagos State, killing scores and leaving many others fatally injured. Despite pictorial and video shreds of evidence, the Lagos State Governor, Babajide Sanwo-Olu denied that there were any killings. More worrisome is the fact that the Nigerian army denied involvement in the sporadic shootings.

Nigerians had expected that Buhari, who had been silent over the ravaging protest, would empathize with the victims, particularly those at the Lekki tollgate, and take drastic decisions to put the situation under control but the President left Nigerians rather stunned and speechless.

The President, whose speech was largely centered on how he has been providing employment opportunities for the youths rather than the burning issue, warned that any form of mayhem that will undermine public security will not be tolerated.

“I, therefore, call on our youths to discontinue the street protests and constructively engage the government in finding solutions. Your voice has been heard loud and clear and we are responding,” Buhari said.

The President’s speech has caused public outrage and formed another agendum in the public domain as Nigerians have taken to social media to lambast him for failing to mention the Lekki massacre and empathize with the victims.

Reacting to Buhari’s speech, former Minister of Aviation, Femi Fani-Kayode, on his official Facebook page, wrote “Buhari’s speech was an insult to our people, a disgrace to humanity and a stench in the nostrils of God. He is not warm, he is cold. He is not kind, he is cruel. He is not empathetic, he is sociopathic.

“He is not a President, he is a dictator. He is not a man, he is a monster. He has issued his threat and served his warning. It is left to the Nigerian people to either stand down, shiver in the shadows, bow their heads in shame, tuck their tail between their legs and run away or stand up, hold their heads up high, knuckle down, dig deep, insist on their rights and refuse to budge or be intimidated. The next few days will reveal which choice they have made”.

On his part, President Goodluck Jonathan’s former aide, Reno Omokri who has nicknamed himself as Buhari’ Tormentor, wrote “General Buhari’s speech was a disappointment and set a new world record for most lies told in 10 minutes. He said “No past Nigerian government has approached poverty alleviation as we have done”

“This is from a man who increased fuel and electricity in the same week, thus deepening poverty. He slapped Nigerians in the face and added salt to injury, accusing us of taking his disbandment of SARS as “weakness”. No. You showed your weakness when you were rehabilitating Boko Haram. You showed your wickedness during the #LekkiMassacre of peaceful #EndSARS protesters”

Nigeria’s music icon, David Adedeji Adeleke popularly known as Davido in his reaction, tweeted “I’m so hurt for our generation. EVERYBODY get your PVC READY #ItIsnotFinished”

Also reacting to the speech, Nigerian highlife singer, Adekunle Kosoko who is professionally known as Adekunle Gold, tweeted “Nothing about Lekki Massacre or na my ear? Wait what?!! My heart cannot take this!”

Nigeria’s main opposition party, the Peoples Democratic Party, in a statement by its National Publicity Secretary, Kola Ologbondiyan described the long-awaited address by President Muhammadu Buhari on the protests rocking the nation, as disappointing and completely disconnected from the realities of the tragic occurrences in the country in the last two weeks.

In part, the statement reads: “Mr. President’s address, in the face of the turmoil, witnessed, the unrests as well as the killing of young Nigerians, is, to say the least, depressing and failing in empathy test.

“Our party and, indeed, all lovers of peace in our country, were shocked that Mr. President glossed over the immediate trigger of violent protests – the widely condemned killing at the Lekki Toll Gate by security operatives, a situation which created a global concern and drew the attention of the world to the abuse of human rights going on in our country under his watch.

“Painfully too, Mr. President, as the Commander-in-Chief, was silent on the demand by Nigerians for enquires into the involvement of the military in the gruesome killing.

“Sadly, the long-awaited address failed to inspire any hope. It failed to address the trepidations, the pervading hopelessness, the drifting towards anarchy and provided no concrete steps on how to arrest the situation and rein in bandits, hoodlums, and vandals that were let loose to unleash violence on peaceful protesters and innocent Nigerians.

“In short, from the letters of the address, there were no correlations between the fundamentals of the crisis situation that we have witnessed and the long-sought reaction of Mr. President.

“Mr. President also failed to use the opportunity to further heal wounds and inspire hope by outlining a roadmap to open up the economy in a manner that will enable our teeming hard-working youths to pursue their production goals as well as address the issue of pervading hunger in the land”.