Ethiopia is a landlocked country, bordering on Somalia which is dominating the Horn of Africa. Due to several border conflicts during the past decades with Somalia, many of them supportive of Ethiopia by the US military, the border between the two countries has become porous and ill-defined. Ethiopia is also bordering on Djibouti, where the United States has a Naval Base, Camp Lemonnier, next to Djibouti’s international airport. The base is under AFRICOM, the Pentagon’s African Command. AFRICOM has its boots in Ethiopia, as it does in many other African countries.

Ethiopia’s new Prime Minister, Abiy Ahmed, has already demonstrated that he is poised to hand over his country to western interests, vultures, such as the World Bank, IMF and eventually the globalized Wall Street banking clan. In fact, it looks like these institutions were instrumental in manipulating parliamentary maneuvers, with arm-twisting of the ruling Ethiopian People’s Revolutionary Democratic Front (EPRDF) to make Mr. Abyi the new Prime Minister, succeeding Mr. Hailemariam Desalegn, who rather suddenly was forced to resign in February 2018, amidst endless foreign induced protests and violent street demonstrations. With EPRDF Ethiopia is a de facto one-party state. EPRDF is a coalition of different regional representations.

Proud Ethiopia, has never been colonized by western powers per se, except for a brief Italian military occupation (1935 – 1939) by Mussolini. And now, in the space of a few months, since Mr. Abiy’s ascent to power, the country is being enslaved by the new western colonial instruments, the so-called international development institutions, the World Bank, IMF – and others will follow.

Mr. Abiy is an Oromo leader; Oromia being a disputed area between Ethiopia and Somalia. The latter is effectively controlling the Horn of Africa, overseeing the Gulf of Aden (Yemen) and the entire Iran controlled Persian Gulf area. Control over the Horn of Africa is on Washington’s strategic wish list and may have become an attainable target, with the Oromo leader and new PM, Abiy Ahmed.

Think about it – Yemen, another ultra-strategic location, being bombed to ashes by the Saudis on behalf of the western powers, primarily the US and the UK, being subdued for domination by the west wanting to control the Gulf area, foremost Iran and her riches. On the other hand, Ethiopia, a prime location as an assault basis for drones, war planes and ships.

Curiously, Prime Minister Meles Zenawi, a former rebel leader, elected in 1991 and in power for 21 years, died suddenly at age 57 in August 2012, while actually recovering from an undisclosed illness in a hospital abroad, allegedly from an infection – according to official Ethiopian state television. He was succeeded by Mr. Hailemariam, who last February had to resign. 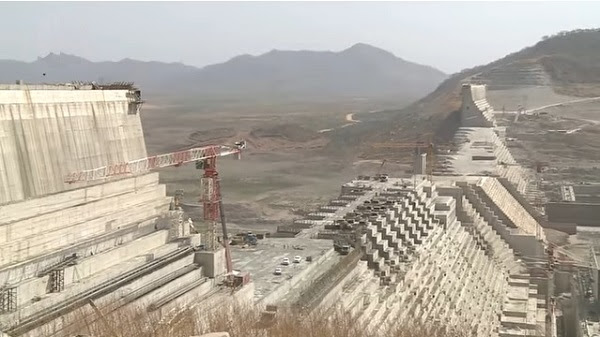 In the same vein of strange events – events to reflect on – PM Zenawi, about 18 months before he died, signed on 31 March 2011 a no-bid contract for US$ 4.8 billion with ‘Salini Costruttori’, alias Salini Impregilo. The Italian company, well established in Ethiopia since 1957, is responsible for the construction of the controversial “Grand Ethiopian Renaissance Dam”, formerly the Millennium Dam on the Nile. When finished, it will be African’s largest artificial water reservoir with a capacity of 74 billion m3.

Under construction since 2011, this gravity dam on the Blue Nile River in Ethiopia’s Benishangul-Gumuz Region, about 15 km from the Sudanese border, is expected to produce 6.45 gigawatts which will make it the largest hydroelectric power plant in Africa and the 7th largest in the world. The works are about two thirds completed, and the dam will take from 5 to 15 years to fill up.

The project was fiercely contested by Egypt which claimed that the dam would reduce the agreed amount of Nile water flowing into Egypt. However, Prime Minister Zenawi argued that the dam would not reduce the downstream flow, and – in addition to generating hydropower and making Ethiopia Africa’s largest electricity exporter, would help regulate irrigation, thus, helping to avert Ethiopia’s notorious droughts and famines that kill regularly tens of thousands of people. Indications are that this dam project could become an economic “power house” for Ethiopia, a country otherwise known as impoverished and destitute.

This water flow conflict between Ethiopia and Egypt was discussed in numerous meetings and conferences of the World Bank sponsored Nile Basin Initiative (NBI), encompassing ten riparian countries (Burundi, D.R. Congo, Egypt, Eritrea, Ethiopia, Kenya, Rwanda, Sudan, Tanzania, Uganda); and about 350 – 400 million people. It is not clear whether the dispute was ever satisfactorily settled.

Mr. Zenawi’s successor, PM Hailemariam Desalegn, continued with the project unchallenged and unchanged until his sudden resignation earlier this year. At the end of August 2018, in a surprise move, the new PM, Abiy Ahmed, ousted the dam project’s subcontractor, METEC, under the pretext of numerous work delays. METEC is a state enterprise run by the Ethiopian military. According to several insider accounts, there were never any complaints about project delays, caused by METEC. The new sub-contract was to be awarded to a foreign private company.

Simultaneously, in another alarming occurrence, on 26 August 2018, Mr. Simegnew Bekele, the chief engineer and project manager of the controversial dam, was found murdered, shot to death, in his Landcruiser in an Addis Ababa parking lot.

The series of events, starting from the signing of the dam project in 2011, to the sudden death of then PM Zenawi a year later, the resignation of his successor, Mr. Hailemariam, earlier this year, the hasty appointment of the neoliberal PM Abiy Ahmed in February 2018, the assassination of the dam’s project manager in August 2018 – all this looks like well-orchestrated, with a few hick-ups in between that were rapidly ironed out – to pave the way for a neoliberal, corporate and maybe foreign military take-over of this once proudly independent country, an African nation with a potentially prosperous future.

This leads to the other side of the same coin, the west is interested in.

With a population of about 104 million (2018 est.), Ethiopia is the second most populous country in Sub-Saharan Africa and one of the most densely populated ones, with an annual population growth rate of about 2.5%. Ethiopia is known for endemic poverty and her periodic droughts. Ethiopia is also the world’s second fastest growing non-oil economy (after Bhutan), having increased her GDP more than ten-fold since 2000, from US$ 8 billion to US$ 80.6 billion in 2017, however with a nominal GDP of only US$850, or US$2,100 PPP (Purchasing Power Parity).

Agriculture contributes about 36% to GDP, indicating a considerable growth potential with regulated irrigation expected to emanate from the Renaissance Dam project. Economic expansion amounted to more than 10% in 2017 and is projected at close to 9% per year through 2019.

This economic profile, plus the potential increase in output from the Grand Renaissance Dam, offer more than fertile grounds for corporate exploitation through debt enslavement and privatization of public, civil and social services. This has already started. Ethiopia’s current debt is a modest 33.5% of GDP – but is predicted to grow to at least 70% by 2022. – Why?

In November 2017 the World Bank has committed US$ 4.7 billion over the coming 5 years, roughly a billion per year – which may be called blank checks. These funds are destined for structural adjustment type activities, for loosely defined and little controlled budget support measures, much of which, as worldwide experience shows, is likely to ‘disappear’ unproductively, leaving behind public debt – and what’s much worse, a plethora of austerity conditions, from cutting public employment, to privatization of water, electricity and other public services, as well as ‘land-grabbing’ type agricultural concessions to foreign agricultural enterprises.

The latter will be especially attractive, thanks to the new regulated irrigation potential, making Ethiopia’s desert fertile – but leaving hardly any additional food at affordable prices for the impoverished population in the country. Frequently such land concessions come with long-term GMO contracts attached. Bayer-Monsanto may already be a player in Ethiopia’s future agricultural sector. If so, the country may not only be enslaved by debt, but also by endless, oppressive, land-destructive GMO contracts that bear high risks for human health.

Such a WB commitment will usually be followed by an IMF intervention, both of which will serve as leverage for further debt from private banking and corporate investors. The modest 2017 debt ratio of about one third to GDP may explode and skyrocket in the near future, making Ethiopia to the Greece of Africa, shamelessly exploited and “milked” to the bones by western corporate and financial interests.

Fortunately, there are other economic interests alive in Africa and especially in Ethiopia. There is, for example, China, for whom Ethiopia is a key partner and a linchpin for President Xi’s Belt and Road Initiative (BRI), a massive China-initiated infrastructure development plan, spanning the globe from east to west, via different routes, one of them via Africa. Although China has become cautious over the past years with direct investments in Ethiopia, mainly due to the lasting unrests, said to be over ‘territorial issues’, Ethiopia remains an important partner, because of its strategic location next to the tiny port of Djibouti, where China has a naval base. Ethiopia is also attractive for manufacturing with low-cost labor and because of her transport links to other African countries, and a potentially large consumer market.

Chinese, Russian and other eastern investments are usually based on mutual benefits, in contrast to the western one-sided exploitation method. Hopefully, Chinese, Russian and other eastern investments may continue as a strong counter-balance to the west, and help bringing a more equitable development model not only to Ethiopia, but to the African Continent in general. In fact, recent statements by the leaders of South Africa, Ghana and Rwanda have praised Chinese investments over the western abusive ‘carrot and stick approach’. With the help of China, Russia and other eastern investors, Ethiopia might prevent western vultures from devouring the poverty struck nation and from falling into the trap of neoliberal, everything-goes “free market ideology” – to the detriment of the Ethiopian population.

Peter Koenig is an economist and geopolitical analyst. He is also a water resources and environmental specialist. He worked for over 30 years with the World Bank and the World Health Organisation around the world in the fields of environment and water.

5 foods and drinks to get rid of that hangover

The Place of Prophecy in a Democratic Government

Boko Haram: Lawmaker urges FG to look into the source of...

January 23, 2020
Newschronicles is your news, entertainment, music fashion website. We provide you with the latest breaking news and videos straight from the entertainment industry.
Contact us: info@thenews-chronicle.com