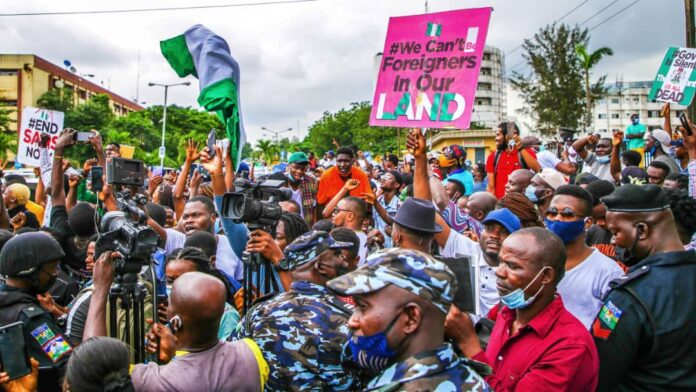 A relative of mine had arrived at Makurdi late, from a journey. Their vehicle had broken down at some point along the way. Hence their late arrival. That year, there was a curfew on bikes from 7pm. So his best bet at going to his house was with a commercial bus. At the time he arrived, there were very few buses plying his route. He had stood for almost thirty minutes when he saw what he thought was a bus. He flagged down the vehicle. When it got to where he was standing, he realised with dismay, that he had just flagged down a police van. That was the beginning of a long, horrible night.

Angered by his effrontery to flag down a police vehicle, my relative was subjected to a search. He is a graphics designer who always moves around with his laptop. When they saw the laptop, they declared him to be a thief and forced him into their van. His pleas to reach home and produce the receipt of purchase, fell on deaf ears. He was taken to their station, beaten, divested of his belongings and bundled into a cell.

They let him make one call to his mother, who left home at past midnight, to go and bail her son from police custody. When she arrived, it was hard to strike a burden. They wanted an amount of money which the woman did not have. Her son who had told his mother not to give the police anything, had to keep quiet after they threatened to parade him among criminals, the next day, if they did not cooperate. This was a young boy who had never stolen in his life. His mother had no choice. It was better to pay than to see her son paraded before the media, alongside hardened criminals.  He is just one, out of the many number of innocent young people who have had their lives and dreams snatched away by men of the Nigerian police, over a false allegation.

This incident happened ten years ago. Ten years after, nothing has changed. Police brutality has instead, been on the increase. He still moves around with his laptop and I dread to think what would happen to him, if he happens to have an encounter with the dreaded SARS.

I used to think the menace of the deadly SARS was only in the eastern and western parts of the country until I heard a story that chilled me to my bones.

A young man was on his way home in the same city of Makurdi, early this year. He decided to stop over and buy some Suya. While he was waiting for his order to be packaged,  a SARS vehicle drove to a stop beside them. The officers alighted to purchase some Suya as well. He greeted them. As he was about to leave, something told him to pay for their  Suya. They thanked him and bid him goodnight.

That singular act, was what saved him moments later, when he was picked up at his junction, during a raid for robbers along that area. Together with about four other young men, they were going to be killed that night on the excuse that they were armed robbers.

They were driven to a lonely road and the killings began. He was the third person to be shot but he was recognised as the man that bought them some Suya not too long ago. That was what saved his life. These men had covered their faces with masks so he could not even recognise them even if his life depended on it. Imagine that he had not bought that Suya for them. He would have died alongside four other young men whose lives had been cut short on allegations of robbery.

If I had to share every story I have heard, of police brutality and extrajudicial killings at the hands of SARS officers, it would fill a book.

Over the past few days, the campaign to end SARS, has reached a momentum that has never before been seen in this country. Young people who have borne the brunt of SARS brutality over the years, have taken to the streets to demand that the federal government put an end to the operations of SARS across the country.

It is sad that a unit of the Nigerian Police, which was established to deal with crimes ranging from armed robbery, kidnapping and other violent crimes, has become a thorn in the flesh of the same people it was meant to protect. Extortion, intimidation, torture, extrajudicial killings and corrupt practices, have become the characteristics by which this unit of the law, is recognised. Such that, people now joke that they would rather fall into the arms of armed robbers than have an encounter with men of the Special Anti Robbery Squad (the name of the unit itself, is such an irony).

One cannot fault the campaign to end SARS especially since the unit has several times too many, gone contrary to the rules of engagement establishing it. But the question is, will putting an end to SARS bring about any change? Will that be the much-needed solution to the rogue activities of the dreaded unit? SARS is only but a unit of the Nigerian police. We know that the entire force itself is riddled with a lot of corruption, unprofessionalism, abuse of human rights, power-drunk/trigger happy police officers and extrajudicial killers. Are these not the same reasons for which Nigerians want SARS to be put to an end? Putting an end to SARS without addressing the rot that the entire police force has become, is a classic example of “Soldier go, soldier come, barracks remain.” SARS is a big problem but the entire Nigerian police is a bigger problem.

If the federal government decides to end SARS, it needs to go beyond that. The whole police force, should be reformed. There are complaints of gross underpayment. Recruits are made to pay money before they are enlisted on the force. Compare the barracks of the Nigerian police to the barracks of the Army and bases of the Navy and Air force. The difference is always as clear as night and day. While detailed attention is paid to the quality of people that enlist into the Army, Navy and Air force, the Nigerian police seem like a force where just about anyone can be enlisted into. It is therefore not strange to see someone who does not have any inkling whatsoever, of what the job and the law entail, manning the various police posts scattered around the country. Worse still, these set of people are not checked to be sure they are psychologically equipped for the job, before a gun is handed over to them.

So put together gross underpayment, poor living standards, ever-growing responsibilities and a gun. What you have is an angry policeman who does not mind using his gun to intimidate and extort money from other Nigerians. You do not pay a man poorly and send him to protect the rich or middle class. Envy and anger will set in. Worst-case scenario, he maims or shoots them to death in frustration.

One may argue that the Nigerian police is better paid than some other professions. How come people in those professions don’t behave like the police. Question is, do those people have guns?  If they do, some of them might go the way of the angry policeman we encounter daily at roadblocks and police stations.

There is a need to review the salary structure of the Nigerian police. There is a need to improve the standard of their official living quarters. A visit to any of their barracks in any part of the country, presents one with a picture of squalor and poverty. It is also important to subject them to psychological evaluations every once in a  while, so as to ascertain the state of their mental health. That thing that tells the average Nigerian police that because he owns a gun, he can become power-drunk and aggressive, needs to change. The lower cadre of the police, who are the ones mostly found manning roadblocks and checkpoints, need to undergo professional training to keep abreast of the latest developments on the job. Officers who go against the rules of engagement should be severely punished to serve as a deterrent to others.

The #endsars campaign has attracted a lot of support both within and outside the country, with a number of celebrities lending their voices to the campaign. But the truth is, ending SARS without a total overhaul of the Nigerian police, would be like we say in local parlance, just another case of ‘Soldier go, soldier come, barracks remain.

The writer can be reached on ebutemay@gmail.com