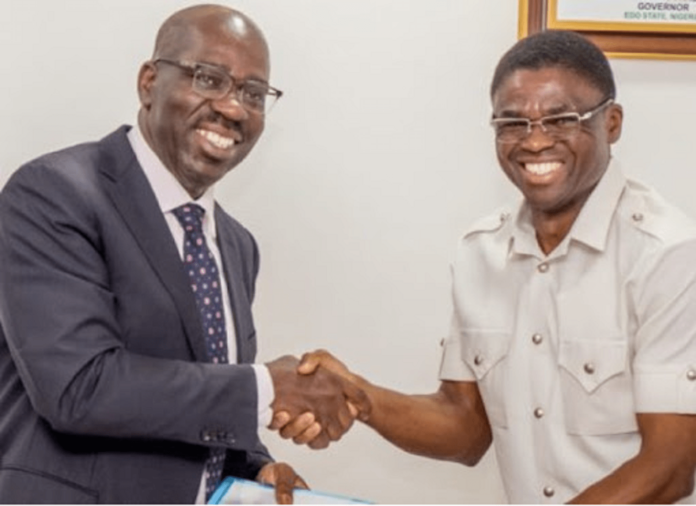 A positive political horizon which signposts the victory of Governor Godwin Obaseki in the September 19 governorship election, rejection of godfatherism, people’s power in politics and the state’s agenda for sustainable development were given at the weekend by Edo State Deputy Governor, Comrade Phillip Shaibu as the four main reasons for quitting the All Progressives Congress (APC).

The deputy governor says the odds are in the favour of the People’s Democratic Party (PDP).

Shaibu told reporters in Uzairue, Etsako West that every taken step so far made had been accepted by the good people of Edo State.

‘’Edo North is the home of development. Edo North is home for politics and Edo North is where we established the new tradition of development when we brought in Comrade Adams Aliyu Oshiomhole. When people say I sacrificed a lot to have a government and a system that is working, I say yes I sacrificed a lot to have a system that is working but I can tell you that one of the greatest sacrifices I have made in my political career is leaving the party I helped to build, the party I laboured for. I wrote the mission statement of Grace Group that metamorphosed to AC and ACN that merged to now have APC. So you can call me a foundation member. We formed APC. So to leave that party to PDP is one sacrifice that we have to make for the development and the sustainability of the tradition of development in Edo State. That is the joy I have. I did not hesitate to move when we were chased out by the man that is a beneficiary of our collective struggle’’.

He said it was regrettable that Oshiomhole moved away from the family tradition in Edo State.

‘’Adams Oshiomhole threw us out, disqualified us from the party that we formed. Oshiomhole had always told me that when a man throws a stone into your house and you do not show that there is a man in that house, then you are not manly to be called a man. So it was a time to actually show him that a stone has been thrown into our house and that there are men in the house that are capable of dealing with that. That is what we have done by moving to PDP.

I am excited about the warm reception we got in PDP. It is the first time and I can tell you that it is the people that made the party, not the party that made the people. I can tell you that the vision that we established in APC has not changed. We are taking it to the next level. I can also assure you that the wealth of experience and that developmental strive are what we are bringing in to PDP. By the grace of God, our people will be the best for it. For us, it is all about the people and the people must continue to lead. We are in PDP and we will make PDP work just like we made APC work. That we have left APC, the foundation of APC is gone. One man cannot dictate the destiny of Edo North. That is what we fought against. No one man can determine what Phillip Shaibu will be tomorrow.

No one man can determine what you will be tomorrow. Leadership must start from the grassroots. The people must decide. The people must lead. I am happy that the man that was a beneficiary of this struggle is still alive and is seeing his children sustaining that legacy which is the tradition of the family that was defined by Oshiomhole’’

Shaibu, in a joyous mood throughout the interactive session with newsmen, thanked the people of Etsako West for their support.

‘This period is not the best time for me when it comes to politicking because my style has to do with the crowd and direct contact with my people. The coronavirus is not giving us that space. That they even came out today shows the love that they have for me. I was only concerned about their health. The crowd is always there and that crowd is what has been keeping me far from coming home because I know there is no way I can control that crowd each time I come. I am deeply excited. I have never doubted their support for me. God has helped me not to disappoint them in all the elections that I have been voted in here’’.