The 22nd edition of the Nigerian Economic Summit Group (NESG) meeting has opened in Abuja, with participants looking to come up with strategies that will spur economic growth through heightened patronage of made in Nigeria goods and services.

The theme for this year’s summit is ‘Made In Nigeria’ and the organisers of the summit say they are looking to re-emphasise the message that the productive capacity of the Nigerian economy has to be developed as much as possible.

On the sidelines of the summit on Monday, the Vice Chairman of the NESG, Sola David-Borha, told Channels Television that stakeholders would discuss issues affecting Nigeria’s economy and proffer solutions that will reflate the economy and subsequently bring growth.

Mrs David-Borha, who is also the CEO of Stanbic IBTC Holdings, said the group believes that patronising made in Nigeria goods and services will spur the growth of the economy that is already in recession.

“Ultimately, it is about creating the right enabling environment so that Nigerians can make their goods and services for export.

“Companies abroad can come to Nigeria and use Nigerian labour and resources to produce goods as well.

“We believe that a focus on made in Nigeria goods will also help to drive efforts and lead to an export-led growth”.

Over the years, the NESG is seen as a foremost platform for public and private sector dialogue that encourages open debate that will enable the Nigerian economy grow. Such discussions have also led to private sector led-growth and responsible private-sector investment. 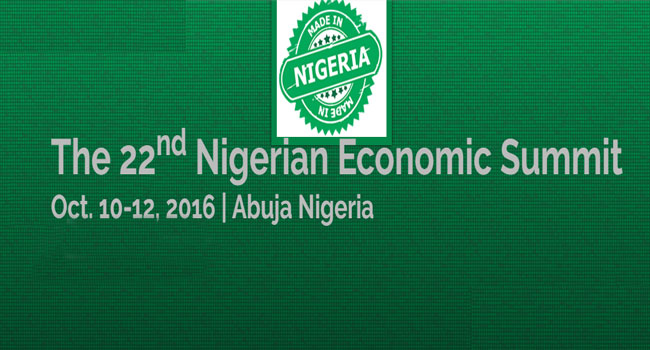 Policies that the group has promoted in the past years are on privatisation, opening up of the economy and freeing up of foreign exchange market.

Despite these efforts by the group, the Nigerian economy in the second quarter of this year officially slipped into recession, with a Gross Domestic Product contract of 2.06%.

The summit is coming at a period that the Naira is weak, but Mrs David-Borha believes that the Nigerian economy has progressed over the past 20 years, saying that the rebasing of the economy showed how much the economy had expanded.

“It is a diversified economy. Oil and gas is only 10 per cent.

“Nigerian goods and services are being consumed. We are talking about increasing the added value and about the fact that our ability to do so can be much better which will also help to grow our economy faster,” she said.

The Vice Chairman of the Summit stressed the need to get all cylinders (sectors of the economy) firing.

“You have to continue to repeat and say the right thing. The markets are liquid.

“Ensuring that our markets are liquid, open and transparent, that there is good governance and that the government put in place the infrastructure and put in place enabling environment,” Mrs David-Borha stressed.

She further described the 22nd edition of the summit as another opportunity to ensure that the group reiterates the same massage it has been making in the past 22 years.

After the opening ceremonies on Monday the summit will discuss macroeconomic policies, with focus on fiscal and monetary policy, which the groups stressed was crucial in driving economic growth.

On Tuesday the Summit will have parallel sessions on the ICT, Small and Medium Enterprises, Micro Credit, services and finance.