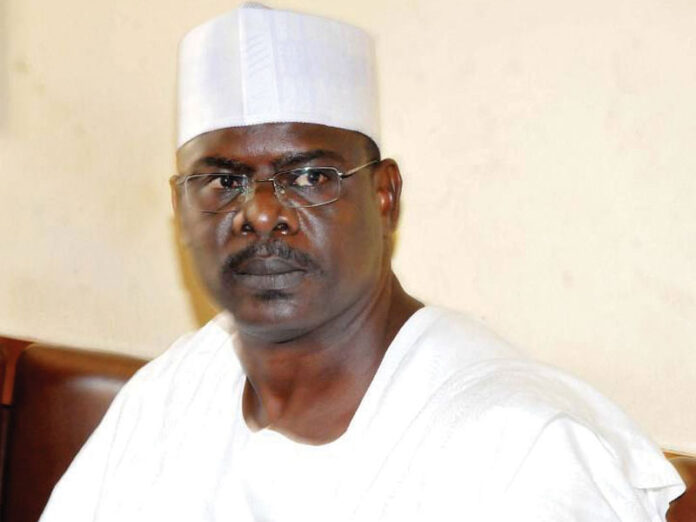 Justice Okon Abang of the Federal High Court, Abuja on Monday, ordered that Senator Ali Ndume be remanded in Kuje Custodial Centre of the Nigerian Correctional Service, NcoS, for failure to produce Abdulrasheed Maina in court.
Ndume who stood surety for Maina, former chairman, Pension Reform Task Team (PRTT) was given the options of being remanded in prison custody, forfeiture of the N500 million bail bond to the federal government by paying the sum into the Federation Account; the disposing of his Asokoro, Abuja property by the federal government in order to realize the bail bond or in the final alternative, produce the fleeing Maina in court, while the session lasted.
Ndume’s failure to choose any of the options resulted in his being led away by officers of NCoS.
The Economic and Financial Crimes Commission, EFCC is prosecuting Maina, alongside his firm, Common Input Property and Investment Ltd on a 12-count charge of operating fictitious bank accounts, corruption, and money laundering to the tune of N2 billion, for which the Commission has so far called six witnesses.
Maina was granted bail in sum of N1 billion on November 26, 2019, which was later varied on January 28, 2020 to N500 million with a senator as surety, and further varied on June 29, 2020, leading to a volunteer by Senator Ndume as his surety.
Since his release on bail, the trial has been adjourned on four consecutive occasions without Maina, making an appearance. As a result, the court on November 18, 2020, issued a bench warrant on Maina, revoked his bail and ruled to try him in absentia.
It adjourned hearing till today, November 23, 2020 for Ndume to show cause why he should not be committed to prison or forfeit his N500 million bail bond by paying the sum into the Federation Account or have his highbrow Asokoro, Abuja residence sold by the federal government to realize the bail bond.
At the hearing Monday, Ndume’s counsel, M.E. Oru, rather told the court that he had applied to the court’s deputy registrar for the record of the court proceedings and the bench warrant that was issued on Maina, and was yet to be obliged. He asked for an adjournment to enable him to prepare adequately.
Prosecution counsel, M.S. Abubakar, however, noted that defence’s submission contained no formal response, either orally or written to the applications that relate to his client despite being afforded the opportunity by the court on November 19, 2020 and during the day’s sitting.
Abubakar, therefore submitted that Ndume should either forfeit the N500 million bail bond, be remanded in prison custody or have his Asokoro, Abuja residence sold by the federal government to realize the bail bond for his failure to produce Maina.for trial.