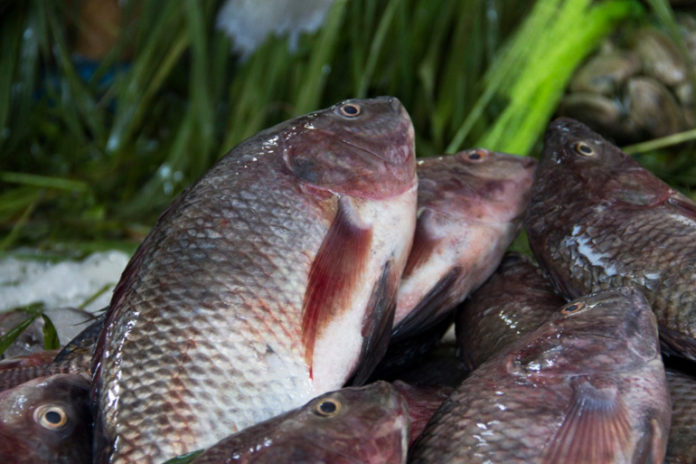 Bukavu, a city in the Democratic Republic of Congo is currently bracing to produce 20 tons of tilapia per week by the end of this 2020.

This will be done through the Tilapia Production in Cages Project implemented by the International Institute of Tropical Agriculture (IITA), and partners.

On April 24, the South Kivu provincial Minister of Agriculture, Fisheries, and Livestock, Marcelin Amani Bahaya, embarked on a tour of the different sites of the fish project activities along Lake Kivu to assess the level of implementation of the project by IITA and its partners.

The tour was concluded at the IITA Olusegun Obasanjo Research Campus in Bukavu.

The minister was accompanied by the IITA project coordinator, Paul M. Dontsop Nguezet, the provincial head of office for FPI, Mrs Chantal Tawaba, and other IITA staff involved in implementing the project.

The successful implementation will lead to the reversal of the trend of more than 80% fish importation in the province and reduce unemployment among the youth.

The tour included a visit to the 50 floating cages already installed with a capacity of producing 3.5 tons of Marchan fish each week, and to a youth group in an advanced stage, supported by the project, which is already producing and selling fish in Bukavu.

The delegation also visited the cold room, before going to the hatchery at the fish feed manufacturing unit installed at the IITA Olusegun Obasanjo Research Campus.

He confirmed that the project has received needed equipment including floating cages, a unit for fish feed manufacturing, a cold room, a flake ice machine, and a refrigerated truck to be able to produce an average of 20 tons of fish per week by the end of 2020.

“IITA is working with the High Institute of Pedagogy (ISP) and the High Institute of Rural Development (ISDR), both government institutions, along with youth groups, key actors in the private sector, and community-based and smallholder organisations/associations, to enhance aquaculture in South Kivu Province in upscaling the fish cage method to reduce poverty, improve household nutrition and youth unemployment”, Dontsop-Nguezet adds.

Bahaya was however very satisfied with the level of implementation and reassured the implementing partners of government support in addressing the different challenges on ground.

He used the opportunity to reassure the population of government efforts to ensure food self-sufficiency in the Province. “I believe that with this kind of delivery, South Kivu will no longer import fish from China, Rwanda…in the days to come”, says the minister.

FPI representative, Madam Tawaba, said they are already working with microfinance institutions to enable the project beneficiaries to have access to loans for sustaining their businesses across all the stages of the fish value chain.

During the stopover at the IITA station, Acting Officer in Charge, Kokou Kintche, along with IITA researchers and other staff, welcomed the delegation and gave an overview of IITA’s activities in South Kivu.

The visit ended with a quote from Minister Bahaya: “We were dazzled by the work done by our implementing partners for this Project, namely FPI and IITA. We encourage them to do more for food self-sufficiency in our dear province of South Kivu.”