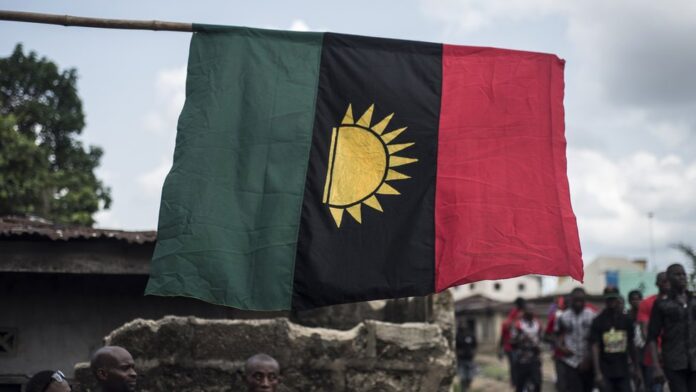 The Indigenous People of Biafra (IPOB) says those congratulating President Muhammadu Buhari and the Inspector General of Police, Adamu Mohammed for scrapping the Special Anti Robbery Squad (SARS) are not sincere and should apologize to the people for the embarrassment.

ENDSARS protests across Nigeria have forced the hand of the IGP to disband the Police Unit and also direct the psychological and medical examination before they are redeployed into the Police Force.

But speaking to TNC correspondent in Anambra on Wednesday, the Media and Publicity Secretary for the IPOB, Emma Powerful said the Senate President, Speaker of House of Representatives, the ruling APC party and other individuals congratulating Buhari and IGP for scrapping the unit must apologize to the people for causing them international embarrassment.

“This deceit should not be tolerated by any right-thinking person. The congratulations are a mockery of the blood of the innocent victims of SARS and other overzealous security personnel in the country. IPOB is calling on all the families of victims of extrajudicial killings particularly those killed during the on-going ENDSARS protest to come out and show their grievances to the world, Nigeria Government and to the Police. The protest should continue until the right changes are effected,” he said.

IPOB accused the Federal Government of just giving SARS a new name, urging those commending the disbandment to refrain as according to them, the unit still exists in another name.

The group however applauded Nigerian youths for waking up from their slumber to demand justice and fight against criminality in the Police Force.

“We the global movement of the Indigenous People of Biafra (IPOB) ably led by our Leader, Mazi Nnamdi Kanu, wish to commend Nigerian youths for waking from their slumber to demand justice and rescue their future from strangers. IPOB gives kudos to all those involved in the on-going #ENDSARS protest all over Nigeria. We are happy that at last the youths of this generation have come to terms with the brutal reality of life in Nigeria which we saw many years back.

“It is worrisome that Nigeria’s security personnel are lenient to criminals but brutal to their so-called citizens. A look at the video of army brutality published on the social media handles of our leader will make the most ardent one ‘Nigerianist’ think twice about reciting the national anthem.

“Nigerian youths must not relent in fighting these criminals who abandoned all their responsibilities in dealing with armed robbers, kidnappers, ritualists and evildoers and resorted to chasing after innocent people who are already encumbered with the hardship caused by the government. The youths must continue until they get results,” Powerful said.