President Muhammadu Buhari is committed to the freedom of the press, and restoration of Nigeria’s fortunes within the shortest possible time, presidential spokesman, Mr Femi Adesina, has said. This is contained in a statement released on Sunday in Abuja by Mr Abiodun Oladunjoye, Deputy Director, Information at the Presidential Villa. Adesina gave the assurance when the out-going Chairman and the Chairman-elect of the State House Press Corps, Kehinde Amodu and Ubale Musa jointly visited him in his office. Adesina, who is the Special Adviser to the President on Media and Publicity, said it was noteworthy that the election of officers into the Corps was done in a transparent manner. According to him, this is in tandem with the stance of the current administration to allow elections hols devoid of any form of interference. He reiterated the belief of President Buhari that Nigeria would only be great again, if Nigerians shun all forms of corruption, greed and selfishness in their actions. The presidential spokesman noted that “the election of Ubale Musa is very instructive, given that the same Musa was “rusticated” from the State House Press Corps by the previous administration. “It is this administration that restored his accreditation.” He said the gesture was a clear demonstration of the belief of the Buhari administration in the freedom of the press. Adesina, therefore, called on the chairman-elect to continue to lead his colleagues in an inclusive manner, having enjoyed an overwhelming support in his electoral victory. In his remarks, the outgoing chairman, Amodu, said the best candidate won the election. He assured that given the maturity and level headedness of Musa, there would be no form of acrimony or friction between the Corps and government officials in the Presidential Villa. The Chairman-elect, said he was happy to have come up at this time in the life of the administration and asked for the cooperation of the presidential spokesmen to make his job easy. He assured the presidency of support in the implementation of its change agenda. The News Agency of Nigeria (NAN) reports that Amodu and Musa also paid similar visits to the Senior Special Assistant to the President on Media and Publicity, Mallam Garba Shehu. Ubale Musa is a correspondent of Deutsche Welle. 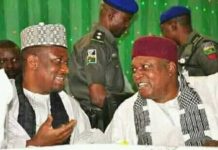