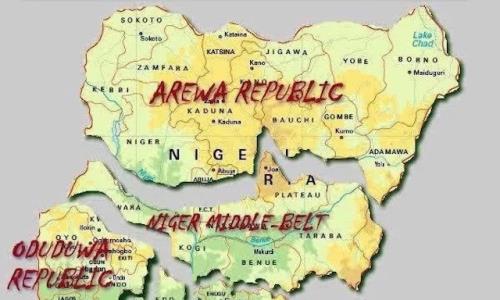 One of the ignominious narratives told by implacable fifth columnists in Nigeria revolves round the possibility of the breakup of their country along ethnic or religious lines. What this means, in the opinion of irredeemable segregationists, is that Nigeria is unwieldy and, therefore, should dissolve into several self-governing nation-states to replace the one, united Nigeria clumsily woven by Frederick Lugard in 1914.

Five years after Nigerians celebrated the centenary of their country, it appears the hot air over the country’s ill-advertised break up is gradually coming to grief. And the reason for this is not far fetched. It is taken that several misrepresentations about Nigeria are hatched outside the country’s shores but the improbable talk of a breakup, either now or in the immediate future, is a home-grown fallacy. It is one bad product which some Nigerians successfully exported abroad.

The idea that a north- south religious divide exists in Nigeria is a myth, a lazy and epidermic thesis forced down the throat of Nigerians. At best, the idea of a north-south divide is a deliberate distraction, woven by a crassly-incompetent political elite to stoke the fire of disunity.  Unsurprisingly, the Western press has literally adopted the misnomer which is fast gaining converts elsewhere. It is now standard practice to hear glib-tongued Al Jazeera correspondents regularly talk of Nigeria’s Christian south and Muslim north in their reports.

The narrative has been so robust, so repeatedly rendered and embellished to have excited late Libyan leader, Colonel Muammar Gaddafi. Himself a strong advocate of one, indivisible United States of Africa with one central government, Gaddafi once advocated for Nigeria to be dismembered, Sudan-style: one, supposedly, for the Muslim north and the other, supposedly too, for the Christian south. Gaddafi’s suggestion was widely hailed to be the gospel truth but few bothered to acknowledge when he later recanted and confessed that he spoke out of ignorance.

You too must have heard similar beer garden talks from Nigerians who should be better informed about their country than Gaddafi. Yes, you probably have heard Nigerians, more out of self-imposed frustration than ignorance, suggest that a breakup is ‘the only’ solution to the problems of the country. Curiously, you are likely going to draw blank if you posed that pertinent question: along what lines do we breakup?

None should delude themselves that Nigerians fear a breakup, Czech- or Sudan-style. Hell! No! The worry is that those who clamor for a breakup see the north as a major drawback, an albatross of sort, around the neck of Nigeria. And, no one can blame them! Over the past several decades, an increasingly clueless political leadership in the northern Nigeria is happy to parasite on oil-driven monthly federal allocations instead of exploiting the abundant non-oil resources in the north. It is the lustful glances, so nauseating, that political leaders of the north cast at oil revenue that fuelled the ill-depiction of Northern Nigeria as one large, inhospitable plain inhabited by Almajiri who contribute nothing to national wealth.

Back to the issue at hand! Truth is that each time we talk of a breakup, Nigerians do not take into account God’s own hand in the historical events that birthed Nigeria in 1914. For instance, a cursory look at the seventeen states that make up the so called Christian south shows that there is no way a country would be carved out therefrom to reflect the Christianness of the south.  In all honesty, can the predominantly Yoruba speaking south west, where there are as many Muslims as there are Christians, be genuinely referred to as part of  Christian south?

The Muslim population in Yorubaland is not a minority group! Even if, as it is assumed, the average Yoruba Muslim is liberal with his religion, it is very unlikely that they will be prepared to succumb to the idea of a Christian Republic of Oduduwa. In the whole of southern Nigeria, it is in the South-South and the South-East geo political zones that we find indigenous Christian populations in the majority. But again, there are indigenous Igbo who are Muslims just as we have indigenous Muslims in Rivers and Edo states whose interests must be considered when we glibly talk of a Christian south.

Coming up north, of the three geo-political zones, only the North-West may be described as predominantly Muslim. And even at that, there is a significant indigenous Christian population in the North-West whose interests must be considered too. The North-East and North-Central are a different kettle of fish beause there is no state in the two zones where Christians could be referred to as an insignificant minority. None! In fact, in at least two states in the North-Central, Muslims are a clear minority. And, by the way, which state in the North-East is ‘predominantly Muslim’? Is it Taraba, Gombe or Bauchi? Not even Borno, the home of Boko Haram is predominantly Muslim!

Frustration, especially with the parlous state of the economy, comes to mind each time Nigerians canvass for the dismemberment of their country. In fact, the agitation for a breakup may ethno-religious and political undertones but they have more to do with the economy. Very few Nigerians will resort to violence if the economy is working and if more people are engaged in one form of trade or the other. A lot of the frustration in the land results from a situation where a few find themselves in government, mostly through means that are foul, violent and criminal, and corner the commonwealth. That is about to change.

Thankfully, the present administration has set the ball rolling by making direct remittances into local government accounts after abrogating the obnoxious joint account system. What this means is that Nigerians can now begin to call their local government chairmen and councillors to account. Even at that, our message to political leaders, especially at the local government level, is to get their acts together. This way, local governments have a unique role to play in banishing the bad thoughts of a breakup.

We all have a role to play in healing the country.