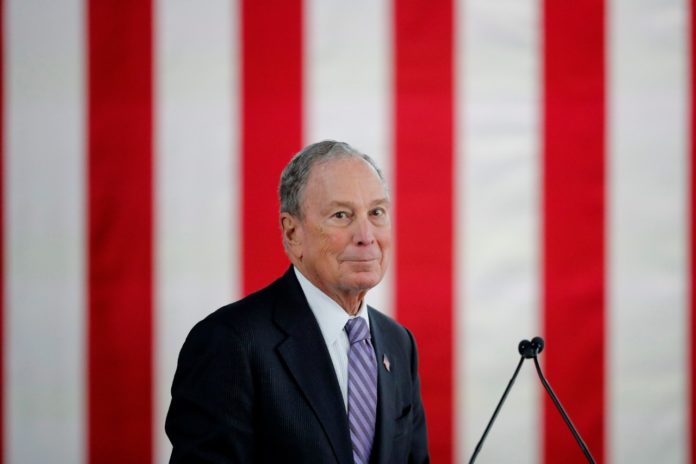 Former New York Mayor Michael Bloomberg on Tuesday qualified for this week’s Democratic presidential debate in Nevada, putting him on the same stage as his rivals for the first tie in the race for the party’s nomination.

The debate on Wednesday will be the ninth in the contest for who will challenge Republican President Donald Trump in the November 3 election.

A late entry to the race, Bloomberg, 78, has risen in public opinion polls as he pours money from his estimated $60 billion personal fortune into a national campaign, spending hundreds of millions of dollars on television ads.

When he takes the stage on Wednesday, he is likely to be challenged directly by rivals over his use as mayor of a policing policy widely seen as discriminatory and of supposed sexist practices at his company.

“There’s a lot to talk about with Michael Bloomberg,” former vice president and candidate for the nomination Joe Biden told NBC’s “Meet the Press” on Sunday.

Bloomberg had support from 19% of the people surveyed in an NPR/PBS NewsHour/Marist poll released on Tuesday.

With that result, he met the Democratic Party’s requirements for debate qualification by receiving double-digit support in four national polls recognized by the party, his campaign said in a statement.

While Bloomberg is not competing in the first four nomination contests – Iowa, New Hampshire, Nevada, and South Carolina – he hopes to start winning delegates beginning on Super Tuesday on March 3, when 14 states will vote.

Warren and Sanders charge that Bloomberg is trying to buy the election. He responds that he is playing by the rules and has offered to fund the Democratic effort to beat Trump even if he doesn’t win the nomination.

He will likely be grilled about his support while New York mayor of a policing strategy that ensnared blacks and Latinos disproportionately.

Bloomberg apologized for that policy, known as “stop and frisk,” just before announcing he was running for the Democratic presidential nomination.

His campaign has declined to comment on criticism over 2008 remarks in which he tied a housing market collapse to a ban on a discriminatory housing practice known as redlining.

He has also expressed regret over making inappropriate jokes.

The Washington Post on Saturday published what it said was a copy of a 32-page booklet distributed at a party in 1990 that included sexist remarks by Bloomberg, reportedly compiled by his colleagues.

In one case, a saleswoman filed a lawsuit alleging that when she told Bloomberg she was pregnant in 1995, his response was, “Kill it.” Bloomberg has denied making the remark, and the lawsuit was settled. The Washington Post published comments by a man who said he witnessed Bloomberg’s remark.

Bloomberg said in the ABC interview that his company had experienced “very few” cases of sexual harassment given its large size, and said he thinks “most people would say we’re a great place to work.”

He said the company would not release women from non-disclosure agreements that were part of legal settlements, some of which stemmed from allegations of sexual harassment. Warren has called on Bloomberg to release the women from the agreements.

On Sunday, Bloomberg campaign spokeswoman Julie Wood said in an emailed statement regarding the allegations in the Washington Post: “Virtually all of this has been reported over the past two decades. In any large organization, there are going to be complaints — but Mike simply does not tolerate any kind of discrimination or harassment, and he’s created cultures that are all about equality and inclusion.”