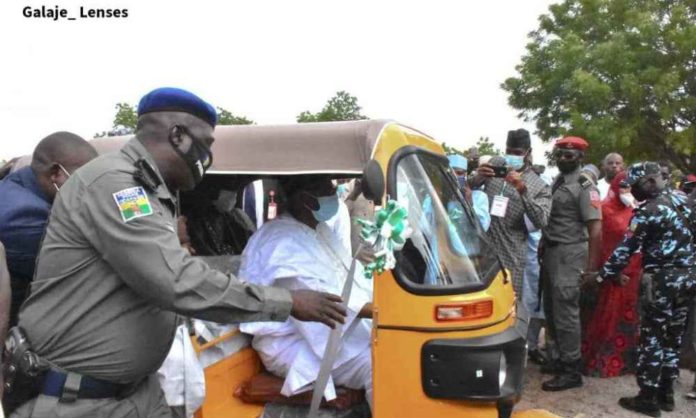 By Nick YashiThe Bauchi State governor, Bala Mohammed, has officially commissioned and distributed the first batch of 1,000 units of commercial tricycles (keke NAPEP) numbering 345 units in Bauchi.
The State government stated that it expended the sum of N250 million out of the N500 million earmarked for the purchase of commercial  tricycles and vehicles to ease transportation challenges caused by COVID 19 in Bauchi State.The State government hadearlier issued an executive order, placing a ban on commercial motorcycles commonly called ‘Achaba’, for health and security reasons.According to the governor, the commercial tricycles are being given out on the basis of hire purchase, aimed at ameliorating the sufferings of former motorcycle riders and provide income  for the unemployed youths.“To provide income generating venture for our people and ameliorate the difficulty in transportation, we are providing 1,000 units of keke NAPEP, and it will be a continuous programme, like a revolving scheme to enable others benefit from the scheme.“For this project, we deposited N250 million for the purchase of keke NAPEP, and we have also deposited another N250 million naira in a microfinance bank for the purchase of Sharon and Vectra vehicles to ease transportation in our state.“To be clear, Achaba was not banned to criminalize poverty, it was with great pain that we banned Achaba temporarily due to health and security reasons. The purchase of these keke NAPEP is not for profit-making, it is to ameliorate the suffering caused by the ban of Achaba. We hope that beneficiaries will cooperate with our vision so that it will also benefit others. I hope that the provision of these Achaba will create empowerment for our people. I thank our traditional rulers, our religious leaders and everyone who helped to make this a reality,” the governor said.Governor Mohammed added that  government sat down with stakeholders in Bauchi State to ban the use of Achaba temporarily pending the time, the menace of COVID 19 is over, adding that the ban is not meant to continue forever, but for the meantime.He said that when the state would have overcome the pandemic, then the government will allow the use of Achaba in some local government areas and villages in the state.