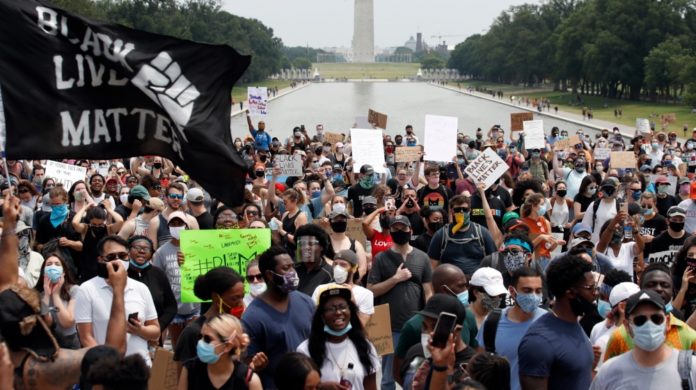 As protesters mobilise against racism in Europe in the wake of the killing of George Floyd in the United States, Human Rights Watch says it is important not to forget the victims of modern indifference and hate in Europe.

The Acting Deputy Director, Europe and Central Asia Division of the global rights group, Judith Sunderland, says an estimated 20,000 people died on the overcrowded, brutal slave ships owned by Edward Colston, the 17th-century slave trader whose statue protesters toppled and threw into the harbour in Bristol, England, earlier this week.

That tragic figure is finding a strange echo in Europe’s more recent history. Since 2014, more than 20,000 people have died or gone missing in the Mediterranean Sea.

‘’We shouldn’t carelessly equate the slave trade of the 17th century across the Atlantic Ocean and boat migration across the Mediterranean Sea in the 21st century. At a minimum, that would deny the agency, determination and courage of so many people on these modern-day voyages across the seas.

‘’But, there are certainly some parallels. Now as then, black and brown human beings are packed into the hull of boats for frightening journeys to uncertain futures. Thousands never make it — they drown or die of dehydration or exposure or simply disappear’’, says Sunderland.

The grim connection was not lost on migrants’ rights activists or demonstrators in Italy — one of the countries so many of the deceased were trying to reach. At a recent protest there, one sign reads: “From the Mediterranean to Minneapolis underwater or under a knee, I can’t breathe.”

Since 2014, the European Union and its member countries have focused on stopping the boats from reaching Europe rather than saving lives.

Europe’s indifference and attempts to outsource its responsibilities to its neighbours is clear across the Mediterranean, from the western sector between Spain and Morocco to the eastern part between Greece and Turkey.

According to the rights group top official, ‘’European governments have abdicated their responsibilities to carry out search and rescue operations at sea, and then obstructed and criminalised the nongovernmental groups that stepped in to save lives.

‘’In the central Mediterranean, by far the deadliest stretch, Italy and Malta have shamelessly squabbled and dithered over rescues, even as they closed their ports and struck bilateral deals with Libya to block the boats.

‘’This is all part of the overall EU strategy to outsource migration control to Libyan authorities. A central plank of this effort has been to fund, train and empower Libyan Coast Guard forces to intercept boats and to ignore that they then drag their occupants back to arbitrary detention and abuse in Libya.

‘’The evidence of brutality against migrants there is overwhelming, especially against those in nightmarish arbitrary detention. They are treated as commodities, pressed into forced labour and sold among trafficking networks, their bodies brutalized to extort money out of distraught relatives back home.

‘’The EU’s failure to prioritize rescue operations and the willingness of EU governments to condemn people to abuse in Libya give the lie to the periodic spectacles of compassion over tragedies at sea.

‘’Instead of platitudes, European leaders should offer ships and life jackets and safe ports to those rescued at sea. They should support, not obstruct, the efforts of NGOs and rescue groups.

‘’Just as justice for George Floyd requires addressing structural racism, ending deaths in the Mediterranean requires coming up with a different approach to human mobility.

‘’Europe should adopt policies that respond not only to the needs of that fleeing persecution and violence but also to the aspirations of those seeking to better their lives. This means creating more safe and legal pathways to minimize the need for people to resort to dangerous journeys.

‘’Europe should also adopt border governance policies and migration cooperation arrangements that are based on respect for human rights and human dignity, not exclusion and violence. And Europe should work toward creating inclusive societies where discrimination and racism have no place, and newcomers and people of immigrant origin alike experience just and fair treatment.

‘’Whether you believe protesters were right or wrong to throw a statue into a harbour, we can all agree that no more human beings should be left to sink into the sea.’’