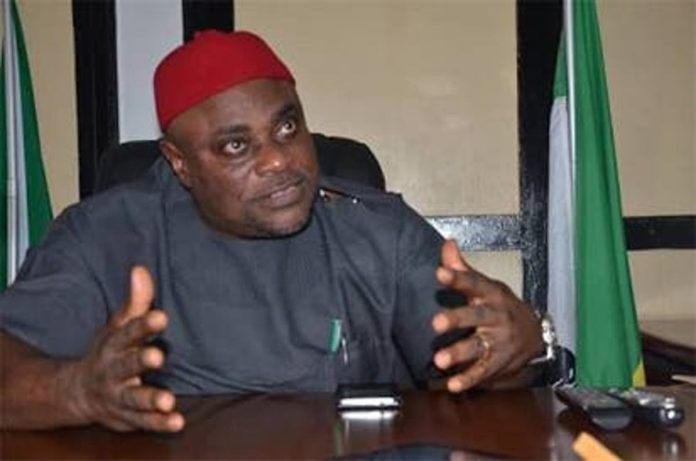 The Anambra State Chairman of the All Progressives Grand Alliance (APGA), Sir Norbert Obi, has congratulated the national chairman of APGA, Dr. Victor Ike Oye on his appointment by President Muhammadu Buhari as a member of the steering committee for the Preparation of Medium-Term National Development Plan from 2021 to 2025 and Nigeria Agenda, 2050.

Last week, President Buhari announced the appointment of Dr Ike Oye as member of the steering committee for the Preparation of Medium-Term National Development Plan from 2021 to 2025 and Nigeria Agenda, 2050.

These two will replace Nigeria Vision 20:20 and Economic Recovery and Growth Plan, both lapsing by December 2020.

Members of the steering committee, who are seasoned Nigerians of impeccable character and conduct, will play key roles in providing oversight, guidance and direction for the preparation of the two plans aimed at accelerated and coordinated national economic growth, lifting millions of Nigerians out of poverty and improving the general well being of Nigerians.

In a release signed by the APGA Anambra State Chairman and made available to newsmen on Friday, Sir Obi described the appointment as well deserved.

The statement described Oye as a man that has distinguished himself in proving to be diligent.

“There is no doubt that Oye’s presidential appointment is well deserved and a profound testament to his leadership acumen and sagacity.

“The appointment, despite his party affiliation, demonstrates Dr Ike Oye’s capacity in people-oriented endeavours and nation-building. Chief Ike Oye has proved on many occasions that he is determined and focused on bringing out the best in whatever task that is given to him. He has excelled in all the major assignments committed to his hands.

“Since his emergence as APGA national chairman, Ike Oye has been a leading voice on issues affecting Nigeria. He has proved on many occasions that he is a Leader to be reckoned with in defending his party members, kinsmen and Nigerians. Because of his passion for a better Nigeria, Chief Ike Oye lent his support for President Buhari’s visit to China, at a point that many opposition leaders were against the Federal Government’s initiatives.

“He believes that the country’s economic partnership with China was in Nigeria’s best interest, insisting that many countries of the world had started showing interest in China because of the vast opportunities it held and because of the economic giant it had become,” the statement said.

Obi recalled how while assuming office in June 2015, the APGA national chairman promised to take the party to greater heights by building a new and cohesive political movement founded on mutual love, peace and fraternity, devoid of bitterness and acrimony.

According to him, today, Oye has been working in line with his promise.

“Under Ozonkpu Ike Oye, APGA won more national and states house of assembly elections across the federation, while APGA has witnessed democratic principles encouraged by united National working Committee. As the All Progressives Grand Alliance felicitates with and congratulates our National Chairman on this enormous national assignment, we implore the Almighty God to continue to bestow him with more wisdom and grace for his tremendous services to APGA in particular and Nigeria in general,” the statement read.