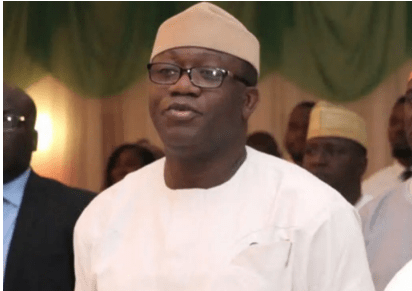 Some All Progressives Congress (APC) stakeholders in Ekiti State under the aegis of Ekiti APC Youth Congress (EAYC) have accused Governor Kayode Fayemi of high-handedness and nepotism.

They said his actions might spell doom for the party in the 2022 governorship election.

Their position was contained in a statement on Thursday by Tope Ogunkuade and Tunji Adeleye, EAYC Convener and Secretary, respectively.

They expressed dismay that despite Fayemi’s closeness to President Muhammadu Buhari, Ekiti has no single nominee among the 41 new ambassadors.

“States like Oyo, Kwara and Kano had three; others like Adamawa, Borno and Benue had two”, the group noted.

They recalled that said in May, Buhari appointed 42 career ambassadors without an Ekiti indigene.

EAYC dismissed the argument that Ekiti was omitted because it has Mrs Eniola Ajayi as Nigerian envoy in Hungary, pointing out that a State like Bauchi has a serving ambassador and got one slot.

“The question is: What special benefit has Fayemi’s claimed closeness to the presidency brought to Ekiti? Even Oyo State where no one claims to be President Buhari’s closest ally has three nominees.

“Besides, what political benefit is a situation where a single town has a Minister, Senator and Ambassador to the party?”

EAYC urged party leaders to prevail on Fayemi to focus on governance and provide quality leadership “instead of running after a vice-presidential position that only God can give.”