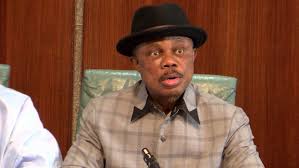 The All Progressives Congress in Anambra State has accused the State Governor, Willie Obiano of abandoning his promise of producing 3 million face masks to be distributed to Anambra citizens for the prevention of the spread of coronavirus.

Governor Obiano had in one of his COVID-19 broadcasts, said the state government will undertake the production of three million face masks for onward distribution to people of the state.

According to the governor, the masks will be produced locally by tailors in all the 181 communities of the state while the various community heads are to assist in identifying the tailors.

Commendations had trailed the announcement as the people believed it would help address the problem of shortage of masks but weeks after, nothing seems to be heard about the initiative.

In a statement signed by its Publicity Secretary, Okelo Madukaife, the State APC expressed disappointment that despite reneging on this very important gesture that could save lives, the governor had the face to order compulsory use of face masks by all residents of the state.

It accused the Obiano-led APGA administration in the state of having the culture of abandoning laudable initiatives that could have a meaningful impact on the lives of citizens.
“We are disappointed, though not surprised that Anambra State Government, controlled by APGA and its 50- year development mob, and led by Governor Obiano set a target of three million masks for Ndi Anambra and abandoned same without explanation.

According to the party, “it is the height of dereliction of duty that having promised to produce three million facemasks with tailors pulled together from communities across the State, the government in one fell swoop wants masks to fall from heaven and be won compulsorily.”

The party, however, maintained that it supports any step that will eradicate COVID-19 permanently from the State, including use of face masks of the right standards.
“While we support any measure that can chase out this deadly pandemic from our state, we are however unable to stomach the yawning gaps of incompetence inflicted on the state by a government that pretends to plan for the next 50 years but cannot practically project into next month. We, however, encourage Ndi Anambra to close ranks to keep COVID 19 away from the state and come back to clean up the filthy stable, because there is always a future,” it said.

Meanwhile, Anambra State Government has said it has not abandoned the proposed 3 million masks production.

The State Commissioner for Information and Public Enlightenment, Mr C-Don Adinuba while reacting to the Anambra APC statement, said the production is on.
He accused the party of violating medical and legal ethics on confidentiality of the identity of cases, adding that the party in the state is playing politics with the whole issue.

“We have never disclosed the name of the index case. It is a gross violation of medical and legal ethics to do so. The names mentioned in the media are speculative. It is terrible for the state branch of any party to seek to disclose the name. Clearly, the party does not recognize that the index case has the right to privacy. Very unfortunate,” Adinuba noted.
Continued Adinuba; “The Anambra branch of the APC cannot even borrow a leaf from the APC- led federal administration, which has been responsible enough to refrain from naming any of the confirmed COVID-19 cases. Nor has it bothered to learn from the leadership of the party which has not sought to name any patient. Why should the state branch choose to be different?

“I will repeat a statement which I made three weeks ago that those who politicize the coronavirus are comparable to mass murderers and genocide perpetrators. They are toying with the destiny of a people whose 7 million lives are threatened by COVID-19.”

He called on the Anambra APC to apologize to the family of the individual it alleged is the index case in the state and to Ndi Anambra for what he called ‘their recklessness’.

“Ndi Anambra, their doctors and their administration are deservedly given a pat on the back for world-class excellence displayed in the management of our index case. Within a mere five days, the status of the index case was reversed from positive to negative. This is most impressive. Both the WHO and the NCDC were here last week to commend the state for exemplary case management. The Anambra APC ought to have behaved better,” he concluded.