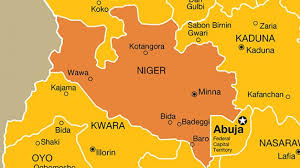 Audu who is currently in the custody of the Niger State Police Command said that he did not regret killing Muhammadu because he was fond of making advances at married women in the village.

He declared that he was satisfied with executing judgment upon the victim insisting he is ready to face the consequence of his action.

“I do not regret killing him because Muhammadu decided to die like a chicken. In his next world, he will not make advances to married women in this village.

“I am ready to bear the consequences, so let the law take its cause. I am fulfilled Muhammadu will never see my wife again, Allah will judge him.”

It was learnt that the suspect’s wife, Hassana Audu, reported to her husband that the deceased had disturbed her for relationship which she refused but he continued disturbing her.

The suspect claimed he had warned the deceased several times to desist from making advances to his wife which refused and provoked beyond reason, he attacked him with a machete, inflicted deep cuts on his head which resulted to his death.

The Command Public Relations Officer, Mohammad Abubakar, said that the matter would be charged to court after investigation.