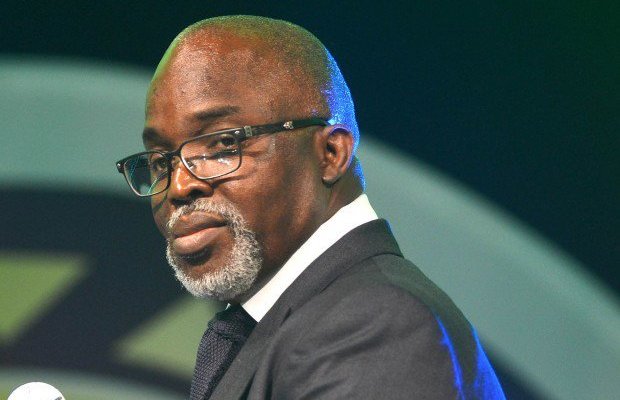 Justice Peter O. Affen, presiding at the FCT High Court, on Thursday finally declined to add the names of President of the Nigeria Football Federation, Mr. Amaju Melvin Pinnick and the General Secretary, Dr. Mohammed Sanusi to a case of financial misappropriation brought before it by the Economic and Financial Crimes Commission, EFCC.
In his judgment, Justice Affen refused the amendment sought by the EFCC to include Pinnick and Sanusi to a trial involving three members of staff of the NFF (two of whom are no longer with the federation) with regards to the utilization of $8.4million grant from world football –governing body, FIFA, and which began in 2018.
It is the second time in few months that a court of law would trash allegations of financial misappropriation against the leadership of Nigeria Football Federation, vindicating their claims that such charges were a result of envy, malice, victimization, and vendetta.
On 5th November 2019, Justice Ifeoma Ojukwu of the Federal High Court, Abuja dismissed in its entirety a 16 –count charge of financial misdeeds (misappropriation of FIFA grant of $84.m in 2014; moving the sum of N4billion from NFF account in November 2018), conflict of interest and non-declaration of assets brought against Pinnick, Sanusi, Seyi Akinwunmi (NFF First Vice President), Shehu Dikko (NFF Second Vice President) and NFF Executive Committee member Yusuf Ahmed Fresh by the now-defunct Special Presidential Investigation Panel, saying the case should not have been brought before her in the first place. It was made clear that the proof of evidence exculpated the NFF officials, and in addition, the certified true copies of NFF accounts supplied by the Central Bank of Nigeria showed that on the said date (3rd November 2018), no transaction whatsoever took place on the account. It was also established that inflow into the NFF account for the entire year 2018 was less than N700million.
Prior to Thursday’s judgment, precisely on 26th September 2019, the Federal High Court declared that the trial of the NFF officials was political and that the court had no time for politics.
Also in September 2019, the same case at the FCT High Court was put on hold as the Office of the Attorney General of the Federation submitted that it was taking over the case with a view to ascertaining its validity, seeing that same persons were being charged spuriously in different courts and/or investigated by several agencies over the same allegations hewed out of petitions by the same individuals.
At the court sitting of 20th January 2020, the Office of the Attorney General declared that it had no further interest in the case at the FCT High Court, as the one brought before the Federal High Court by the SPIP had been thrown out, and the substance of both cases are similar.
On Thursday, the NFF lawyers argued and prayed through a motion duly served on the Office of the AGF that based on law and constitutional provisions, the NFF officials could not be joined in the matter, having been discharged and acquitted by the Federal High Court on practically the same charges, with the same witnesses and proof of evidence for both cases. Furthermore, the NFF lawyers argued that the entire charges bordered on the use of FIFA funds and on which by relevant laws, only the FIFA Ethics Committee has the exclusive right to investigate and adjudicate. In this case, they said, FIFA has not complained to any third party that their funds were missing and/or misappropriated. Rather, FIFA has continued to relate very well with the NFF and even NFF’s account audited by PwC is published on the FIFA website.
Justice Affen, after listening to the arguments, ruled the trial would continue with the three persons initially charged, and he could not allow the motion to join the NFF chieftains in the matter having been discharged and acquitted on similar charges by a court of concurrent jurisdiction.
This means that chieftains of the Nigeria Football Federation are not on trial for corruption anywhere and in any court in the world.
NFF’s counsel, Festus Okpe, gave a summary of the judgment: “This case has been going on since 2018. Initially, the EFCC filed corruption charges against some staff of the NFF, which we challenged. Midway into the trial, they tried to join the leadership of the NFF, namely Mr. Amaju Melvin Pinnick and Dr. Mohammed Sanusi, but we opposed that because Mr. Pinnick and Dr. Sanusi were by that time standing trial at the Federal High Court on similar charges.
“This morning, the court delivered ruling and refused the amendment, so as we speak, there is no charge pending against both of them. The trial will continue with the three persons initially charged and we hope to in due course prove the innocence of these persons.”