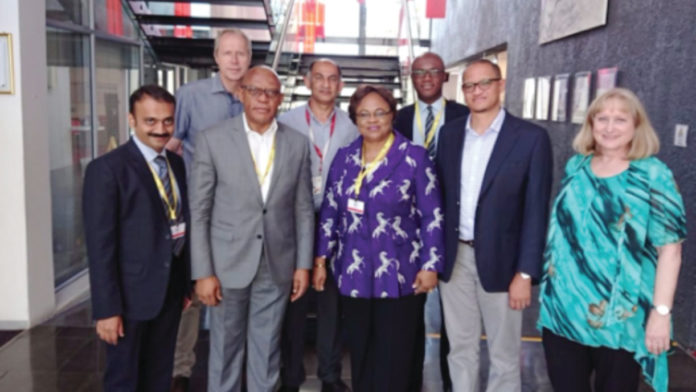 Biovac Institute which is based in Cape Town, South Africa, is the only African vaccine manufacturer of the 40 in 14 countries that are part of The Developing Countries Vaccine Manufacturers Network.

Biovac currently delivers over 25 million doses of vaccines each year for illness such as measles, polio and tuberculosis.

According to the Biovac chief executive, if the continent fails to act quickly, its 1.2 billion people will remain vulnerable to shocks in global supply chains and foreign governments’ trade policies.

Since the COVID-19 pandemic began, nearly 80 countries have imposed some form of restriction on the export of medical supplies.

“African governments should look at the domestic capacity as an insurance for the next pandemic”, Makhoana says, adding, “we cannot continue to rely on external sources.”

With more than 100 projects to develop a COVID-19 vaccine underway around the globe – eight of which have entered the clinical stage – hope is growing for a miracle breakthrough.

But so is concern over who will and will not have access to the shot, if and when one is approved.

Director of the United Nations Conference on Trade and Development’s (UNCTAD) Investment and Enterprise, James Zhan, says “once a vaccine for COVID-19 is available, the massive demand is likely to outstrip supply quickly.

“If the pharmaceutical industry cannot keep up with demand, populations in poor countries will be the ones left behind,” he said while opening a webinar organised with the World Health Organization (WHO).

Lack of access to essential medicines is a tragic reality for many families in developing nations. For example, nearly half a million children in sub-Saharan Africa die each year from vaccine-preventable diseases, according to the World Health Organisation (WHO).

COVID-19 has thrust the issue back in the spotlight.

Fears that access will be based on some sort of pecking order peaked on May 13 when French pharmaceutical giant, Sanofi Pasteur, said the first doses of their vaccine if approved, will go to the United States because its government had invested first in the required research and development.

The following day, more than 140 world leaders and public figures signed an open letter calling for global public health interests to be given priority over nationalism and corporate profits.

The call for a “people’s vaccine” followed a European Union-led event that a week earlier had secured nearly $8.00 billion from governments within and outside the bloc to help ensure universal and affordable access to COVID-19 medication.

And on May 19, the World Health Assembly adopted a historic resolution co-sponsored by more than 130 countries calling for equitable access to vaccines and treatments against the virus.

While the resolution and funds will help, they provide a temporary solution. And with discussions focused on the issue of patents and profits, a fundamental issue is being overlooked: the lack of productive capacity in developing countries.

Vaccine production is currently concentrated in a few developed countries, in the hands of a few major players. According to the WHO, nearly one third (32%) of vaccines have fewer than four suppliers, while nearly two thirds (63%) have two or fewer prequalified products.

Director of WHO’s Regulation and Prequalification Department, Emer Cooke, says “COVID-19 has shown just how vulnerable medical product supply chains are when relying on a small number of manufacturers for raw materials and final products.”

According to UNCTAD and the WHO, many developing countries need help to build their capacity to produce essential medical products, whether they are vaccines, antibiotics or personal protective equipment.

Those that have so far succeeded in establishing a local pharmaceutical industry capable of complying with international quality standards are mostly middle-income and low middle-income countries in Asia, such as India and Thailand.

Productive capacity has remained largely untapped in Africa, where the majority of the least developed countries are located.

UNCTAD’s Legal Officer who works on the issue of local pharmaceutical production, Christoph Spennemann, says “meeting health standards is costly, and the local producers usually don’t have the money.

“They need to attract investments,” he said, “but in the case of vaccines, the market fails to encourage long-term investments because once the threat of a pandemic goes away, the drug may no longer be profitable.”

He said a comparable market failure occurs in the case of antibiotics.

Although investment is a big piece of the puzzle, it’s not a silver bullet. All policies – investment, trade facilitation, intellectual property, health – must be aligned.

For example, disruptions and delays in transportation and customs clearance make the imported active pharmaceutical ingredients costly for local producers.

The same is true for import tariffs. While vaccines or antibiotics can be imported tariff-free in many developing countries, this isn’t the case for the ingredients needed for local production. The result is that local companies are less competitive.

There is also the need to strengthen regulatory systems, improve the business environment and align research and development with market demand.

“The job cannot be done by ministries of health alone”, Spennemann says.

“In addition to bringing together different agencies, it’s important to forge partnerships between the local producers, their governments and the patent-holding companies,” he said.

UNCTAD and the WHO have recently teamed up on a three-year project to help build the needed partnerships and guide governments on the policies needed in the East African Community (EAC) and Ethiopia.

EAC-based producers currently use less than 50% of their capacity, due to COVID-19-related restrictions and shortages in essential active pharmaceutical ingredients imported from abroad.

The project will help align local production of antibiotics in the EAC to the regional public health needs, to increase currently undersupplied antibiotics while reducing excess supplies of those causing antibiotic resistance in patients.

UNCTAD will lend its expertise in the areas of investment, trade facilitation, intellectual property, business development and industrialisation, while the WHO will help governments and businesses understand the regulatory laws and standards.