After 5 years abroad, man asks his wife to swear an oath that she didn’t sleep with any man since he left Nigeria

A Twitter user @Osas_BigEngine has stirred up controversies online after she revealed that a Nigerian man, who just returned to the nation after spending five years overseas, wants his wife to swear an oath that she didn’t sleep with any man while he was away.

Reacting to the post, some persons are of the view that the man should also swear an oath he didn’t sleep with any woman while he was abroad.

@t_chinonso – All of us know women love sex & enjoy sexual intercourse much more than men. They’re the weaker vessels. Yet they pretend a lot that they can stay without sex. The wife has to swear to prove the latter claim

@odion4niaja – Only an insecure man would ask such ridiculous oath, leaving your wife for 5 years is unacceptable and heartless, forget love and hustle.

@Chinwe_Imma – Hope both of them are swearing. Because He also needs to prove he didn’t sleep with any lady over there. They both signed up for faithfulness not only one person. 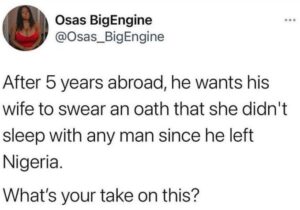