The Court of Appeal sitting in Abuja has affirmed Senator Ifeanyi Okowa as the duly elected governor of Delta State in the April 11, 2015 governorship election.

The judges of the appellate court, in a unanimous decision, dismissed the appeal brought before it by the All Progressives Congress (APC) candidate Olorogun O’tega Emerhor and the Labour Party (LP) candidate Chief Great Ogboru, for lack of merit and substance.

The panel, headed by Justice Uwani Abba-Aji, dismissed the petitions on the grounds that the appellants failed at the lower tribunal to prove the allegations of corruption, malpractices and irregularities during the poll beyond reasonable doubt as required by law.

The appellants had in their petitions alleged that the election of Okowa of the Peoples Democratic Party (PDP) was invalid because it was characterised by various irregularities and non-compliance with the Electoral Act.

The court however said that it was incumbent on the petitioners to tender the necessary documents and demonstrate same to prove their allegations, but that in the instant case they failed to tender any document to do so as required by law.

Once news of the court’s decision reached Asaba, the state capital, residents rushed into the streets in jubilation and sang songs to celebrate their governor’s victory.

Reacting to the ruling, Okowa flanked by his wife, Edith, expressed surprise that Deltans ignored the public holiday to join him at a thanksgiving service held at the Government House chapel, Asaba, after the judgment was delivered.

According to the governor, his victory was made possible by God through the prayers of Deltans who came out massively to vote for him in the April, 2015 gubernatorial election.

“In the last few days, there have been a lot of rumours, a lot of speculations, but we continued to trust in the Lord. I thank God for His faithfulness and I appreciate all Deltans for your prayers and support.

“The wishes of Deltans expressed in the April 2015 elections have been upheld.”
He once again stressed that it was time for his opponents to have a rethink by allowing peace to reign in the state.
“We believe that Delta State is one and we need to live as brothers and sisters.

“Delta State is greater than all of us and if their ambition is all about Delta State and not personal, they should join us in taking Delta State to greater heights,” he said.

During the service, the Rt. Ven. Charles Osemenam, in his sermon, said that the door of prosperity has been opened in Delta State and “God’s name will always be glorified”.

“The victory at the Court of Appeal was the victory of the faithfulness of God, our God cannot fail,” he said.
Prominent Deltans including Senator James Manager of Delta South Senatorial District and members of the House of Representatives attended the thanksgiving service.

However, the court’s ruling did not go down well with Ogboru. His lawyer, Mr. Dele Adesina (SAN), told THISDAY on the phone that his client had already indicated his desire to proceed to the Supreme Court to challenge the judgment returned by the lower ourt.

“Well, our reaction to the judgment of the Appeal Court is not as important to the reaction of our client,” Adesina said, adding, “Our client (Ogboru) has expressed his determination to pursue the matter at a higher level, the Supreme Court.” 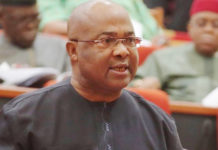