Ibrahim is one of many children forcibly recruited by Boko Haram terrorists when his village was attacked and used in the conflict in Borno State. This is his touching story of courage and hope:
Boko Haram killed Ibrahim’s father one night and forced him to join their ranks. Spending almost a year with the insurgents Ibrahim, who was about 10 at the time, was forced to cook, clean and fetch water for the soldiers.
Daily life was consumed with study of the Quran and at night he had to keep watch for the approaching army. He remembers hearing children crying every night while the leaders slept.

Ibrahim remembers that the worst thing about life with Boko Haram was when they kidnapped people from the villages, arming them and forcing them to fight. 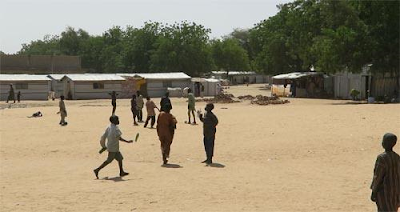 Sometimes Ibrahim was able to return home to visit his mother, if he stayed too long villagers would chase him back to the forest or Boko Haram would come looking.

One day the insurgents were attacked by the Chadian army, they let the children flee but killed anyone big enough to fight. Somehow in the chaos of the scuffle he found himself in the care of the Civilian Joint Task Force, the CJTF. The CJTF, made up of community members from across Borno state, have joined the Nigerian army in the fight against Boko Haram.

Taking him in to custody the CJTF interrogated him on his involvement with Boko Haram but eventually allowed him to reunite with his mother in a camp for displaced camp.

Life in the camp is not easy, sometimes food is scarce but he is happy to be free from Boko Haram. The CJTF are a continued presence in camp life sometimes employing to do small tasks for them.
Despite these challenges Ibrahim has been able to enroll in school in the camp, and receive support to process his experiences with the insurgents.
Ibrahim says all his bad dreams about his life with Boko Haram have stopped and he’s looking forward to the future with the hope of furthering his education and one day joining the Nigerian Army.

COVID-19, 5G Network and the Place of Common Sense in Technological Advancement

Hell is Other People: Pandemic Lifestyles and Domestic Violence