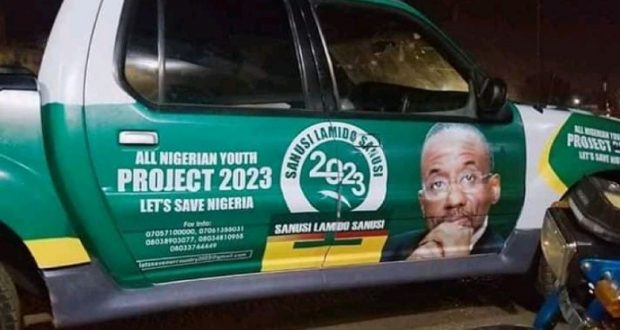 The 2023 Presidential Project of the deposed Emir of Kano, Muhammad Sanusi Lamido Sanusi, has started to filter into the open.

A civic group, All Northern Youths Project (ANYP), is busy mobilising support for Sanusi, a controversial former Governor of the Central Bank of Nigeria to vie for the 2023 Presidency.

The action of the Northern youths is coming as Menas Associates predicted that the March 9 dethronement of Sanusi by the Kano State Government could result in a new candidate in the 2023 presidential race.

Menas has been helping multinational companies operate in the Middle East, Africa, and other emerging markets since the late 1970s.

It is a strategic and political risk consultancy providing actionable intelligence for its clients, from country entry strategies to due diligence, stakeholder analysis, political risk reports, market assessments, problem-solving and exit strategies.

In a report, Menas claims that Governor Abdullahi Ganduje ordered the removal of Sanusi as the Emir — the second most powerful traditional leader in the North — for what he claimed were acts of insubordination.

Sanusi has been having a running battle with the governor who is a member of the All Progressives Congress (APC), President Muhammadu Buhari’s party.

In 2014, former President Goodluck Jonathan had sacked Sanusi as the CBN governor.

This was after Sanusi alleged that $20 billion had gone missing from the Nigerian National Petroleum Corporation (NNPC) which angered Jonathan’s administration who responded by accusing him of financial impropriety.

According to Menas, Sanusi’s troubles with the Kano state government started before the 2019 governorship elections after some of his statements made it appear that he wanted the Peoples Democratic Party (PDP) candidate, Abba Kabir Yussuf, to win rather than incumbent APC governor.

Kwankwanso defected to the PDP before the 2019 elections after a quarrel with Ganduje who had been his deputy when he was governor.

‘’The governor and the APC did not take kindly to Sanusi’s apparent support for the PDP candidate. Kano is a vital state for the APC because it has the country’s second-largest number of registered voters.

‘’In the past two elections Buhari has received his largest number of votes from Kano State which is an APC stronghold’’, Menas says.

Continuing, it says, want the PDP to win the state was taken as an affront by both the governor and the Presidency which sanctioned Sanusi’s dethronement.

‘’After his removal, Sanusi was banished to a remote village in Nasarawa State. He quickly went to court to challenge his banishment as unconstitutional and the court agreed with him on 12 March.

‘’He has therefore since relocated to Lagos where his family is from and where he spent most of his life before becoming the Emir of Kano.

‘’Since his dethronement, there have been strong calls for the highly cerebral former Emir — who is widely admired by a lot of people in the Southern part of the country — to enter the 2023 presidential race.

‘’Sanusi has clearly stated that he is not going to challenge his deposition in court and that he has moved on, which many have interpreted as meaning that he may be interested in entering politics.

‘’A new political permutation of him serving as the 2023 running mate for Bola Ahmed Tinubu — the APC’s national leader and south-west Nigeria’s political strongman — is now being touted even though both are Muslims.

‘’Nigeria’s Christians may find it difficult to vote for them when the Buhari Presidency — which is largely perceived as being pro-Islamic — ends and northern minority Christians would be unlikely to vote for such a pairing.

‘’Sanusi II has also been called on to stand as president. This will be tough because he is unlikely to be given the presidential ticket of either the APC or PDP and, without it, it is almost impossible to win the Presidency.

‘’Also, while Sanusi is popular on social media because of his outspoken nature, he is not so popular in the North and is unlikely to win sufficient votes if he were to stand as president.

‘’While he has criticised the ills of the Northern society, his critics point out that he has personally done little to change things other than talk.

‘’During his period as Emir he did not establish scholarships for Kano’s poor children or establish any training centres that would help women’’, Menas says.

In the meantime, the Northern youths are already procuring vehicles and other logistics to support Sanusi’s alleged presidential ambition.

In a statement, the group says “the campaign for 2023 for the deposed Emir of Kano, Sanusi has kicked off officially in Kaduna, the defunct capital of Northern Region.

“The movement, pioneered by Nigerian youths, has already taken delivery of about 12 vehicles of different grades and brands, donated to it for logistic purposes from prominent Nigerians.”

Some of the campaign vehicles displayed and adorned with Sanusi’s photographs dominated the venue of a press briefing, organised by the group.

National Coordinator of the group, Dr. Suleiman Shuaibu Shinkaffi, is appealing to other Nigerians with presidential ambition for 2023 to bury their ambition for Sanusi.

According to him, “the Nigerian youths are determined to support Sanusi to become the next president of Nigeria, to salvage the nation from its current challenges of Boko Haram insurgency, banditry, kidnappings, herdsmen/farmers crises, killings, among other criminality.

“We’re agitating for Sanusi. With the situation in the country now, only a credible and stainless candidate that is acceptable to all is needed.

‘’We believe that Sanusi is acceptable to all and intellectually sound to turn things around for better for this country. Nigeria is a sinking ship and needs someone of high intellectual ability like him to rescue… “