Abubakar Adam Ibrahim has been announced winner of the 2016 Nigeria Prize for Literature.

Mr. Ibrahim, a Nigerian journalist and writer, won the prize, worth §100, 000, with his novel, Season of Crimson Blossom.

The winner of the prize, which is awarded annually by the Nigeria Liquified Natural Gas (NNLG), was announced Wednesday at a World Press Conference held in Sheraton Hotels in Lagos.

The announcement was made by Prof. Ayo Banjo, Chairman of the Advisory Board for the prize, who praised Mr. Ibrahim’s work.

Three finalists had earlier been named for this year’s edition of the prize.

They were  Elnathan John (author of Born On A Tuesday); Chika Unigwe, (author of Night Dancer), and,  Mr. Ibrahim. 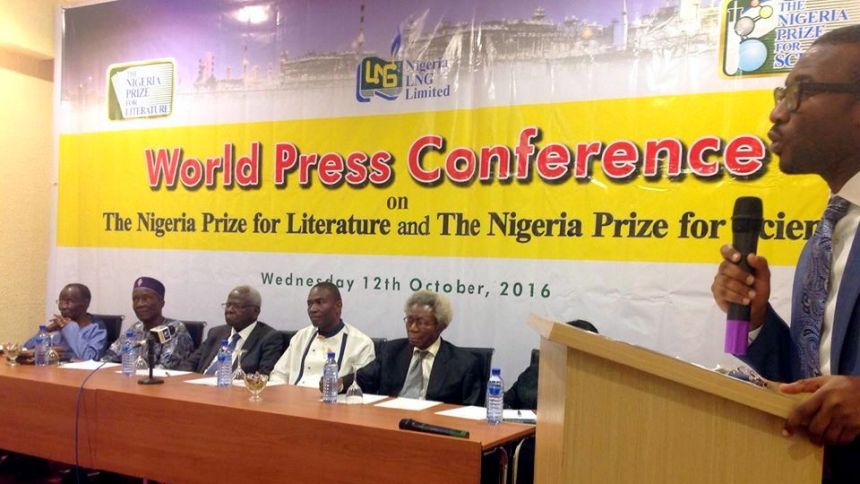 A total of 173 authors of prose fiction entered for the competition this year, which had at the head of its judging panel Prof. Dan Izevbaye, the renowned professor of Literature and literary critic.

Celebrating literary excellence for the twelfth year running, the Nigeria Prize for Literature has since 2004 rewarded eminent writers such as Gabriel Okara for his volume, The Dreamer, His Vision (co-winner of the 2005 prize, awarded in the genre of poetry); Ezenwa Ohaeto, for Chants of a Minstrel (co-winner in 2005 for poetry); Ahmed Yerima (2006, drama) forHard Ground; Mabel Segun (co-winner in 2007, awarded for children’s literature) for her collection of short plays Reader’s Theatre; and Akachi Adimora-Ezeigbo (co-winner in 2007, children’s literature) with My Cousin Sammy. Also, Kaine Agary (in 2008, for prose) for her novel, Yellow Yellow; Esiaba Irobi (2010, for drama) who won the prize posthumously with Cemetery Road; Adeleke Adeyemi (2011, children’s literature) with The Missing Clock and Chika Unigwe (2012, prose), with her novel, On Black Sisters’ Street, Tade Ipadeola (2013, for poetry) with his collection of poems, The Sahara Testaments and Sam Ukala (2014, drama) with his play, Iredi War.

The Nigeria Prize for Literature rotates yearly amongst four literary genres – prose fiction, poetry, drama and children’s literature. The 2016 Prize is for prose fiction and comes with a cash prize of $100, 000. Next year’s prize will be for poetry.

Mr. Ibrahim, journalist and writer is a first-time novelist. He was winner of the BBC African Performance Prize, the Amatu Braide Prize for Prose; a Gabriel Garcia Marquez Fellow (2013) and Civitella Ranieri Fellow (2015) – lays out the influences that have shaped his world view, and his hope of possibly winning the grand prize.

He granted PREMIUM TIMES an interview about his work amd motivations a few weeks ago.

A PREMIUM TIMES’ contributor, Obialije Nweuna, had written about the book: “The Whispering Trees, a collection of short stories by the same author, was an unforgettable experience when I bought and devoured it in 2012. I detected a pleasing evolution in the writer’s art in Crimson Blossoms. It is as if Abubakar Adam Ibrahim has matured greatly since writing those earlier stories, has dug deeper into his artistic well, and come up with something truly “career-defining” – as Toni Kan enthuses in a blurb on the book’s back-cover. The prose, from the very first line, wrapped round me like a welcome blanket on a cold, rainy night. It suffused my being with warmth.

“The Marquez-like conceit of the smell of cockroaches preceding some important events in the book, as well as the italicising of speech made by the characters in the English language and the entire kidnap section in the second-half of the novel, do not impress me much. However, the beautiful language – like crimson petals falling off the page – filled my mind with scent as I moved from line to line. The novelist’s handling of a middle-aged woman discovering love after years of widowhood is masterly. Reza, the unlikely beau of this prim and proper Hausa Muslim matriarch (Hajiyya Binta), has a roguish charm one comes to love as one learns more about him. The dusky affair between the two lovers is believable, and I found myself, despite the discouraging portents, hoping for a “happily ever after” for the foredoomed couple.

“But it was the minor characters of the book that blew me away. Fa’iza with her friends, the twins Kareema and Abida, dreaming of love with movie stars, reading romantic novels and trying on the tools of female seduction – like so many millions of their ilk all over the world. Fa’iza with her issue of PTSD as well. Gattuso, the ever-faithful right-hand man of the top dog, Reza, having the latter’s back at all times, even as Reza is unworthy of such loyalty. The Senator, a perfect incarnation of the “banality of evil”, so different from the “godfather” characters one runs into in Nollywood films. Hureira, the somewhat Lawrentian daughter of Hajiyya Binta, a damsel fated for a lifetime of love-discontent. Munkaila of Maitama twirling car-keys in his fingers and with his nose upturned during his visits home.

“The enlightened Ustaz Nura and his ways. Mallam Haruna and his powerful radio. San Siro with its charms and lively air, reeking of songs, cannabis and sex. Northern Nigeria by Abubakar Adam Ibrahim comes across as potpourri, universe, human kaleidoscope. By the time I got to the end of the book, as in the other two cases, I wanted more like the clichéd Oliver Twist.”